R analytics (or R programming language) is a free, open-source software used for all kinds of data science, statistics, and visualization projects. R programming language is powerful, versatile, AND able to be integrated into BI platforms like Sisense, to help you get the most out of business-critical data.

R Analytics (or R programming language) is a free, open-source software used for heavy statistical computing. The language is built specifically for, and used widely by, statistical analysis and data mining.

Many of the techniques and processes of data analytics have been automated into mechanical processes and algorithms that work over raw data for human consumption. Data analytics techniques can reveal trends and metrics that would otherwise be lost in the mass of information.

Module 4 part 2 – What is Cluster Analysis

1. What are the different data structures in R? Briefly explain about them.

Broadly speaking these are Data Structures available in R:

3. What are the different components of grammar of graphics?

Broadly speaking these are different components in grammar of graphics:

4. What is Rmarkdown? What is the use of it?

RMarkdown is a reporting tool provided by R. With the help of Rmarkdown, you can create high quality reports of your R code.

The output format of Rmarkdown can be:

5. How do you install a package in R?

The below command is used to install a package in R:

let’s look at an example:

6. What are the steps to build and evaluate a linear regression model in R?

These are sequential steps which need to be followed while building a linear regression model: 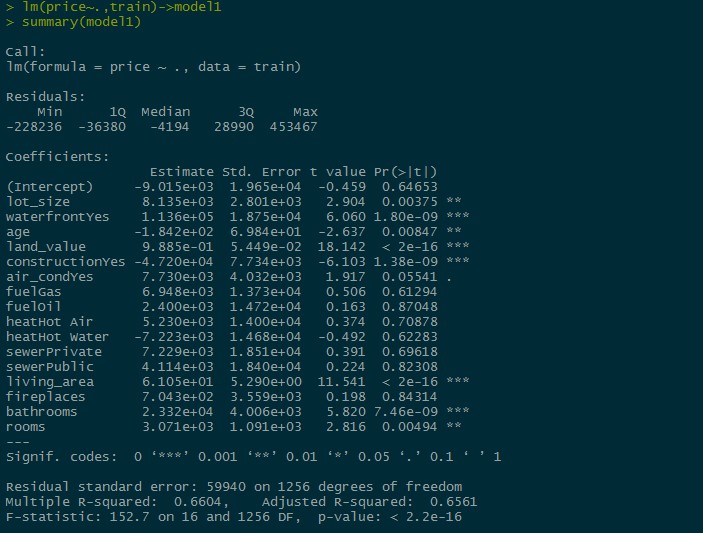 7. Name some packages in R, which can be used for data imputation?

8. Explain about confusion matrix in R?

A confusion matrix can be used to evaluate the accuracy of the model built.  It Calculates a cross-tabulation of observed and predicted classes. This can be done using the “confusionmatrix()” function from the “caTools” package. 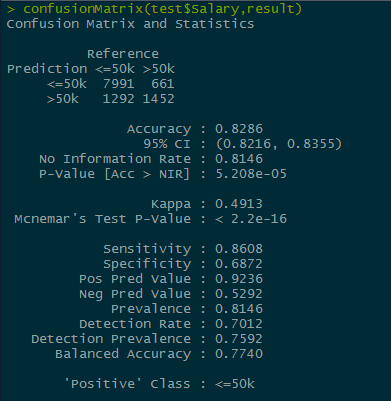 Here, we have created a confusion matrix, which gives a tabulated list for “actual” and “predicted” values.

9. How would you write a custom function in R? Give an example.

This is the syntax to write a custom function In R:

We would have to first create an object template, which consists of the “Data Members” and “Class Functions” present in the class.

An R6 object template comprises of these parts -> 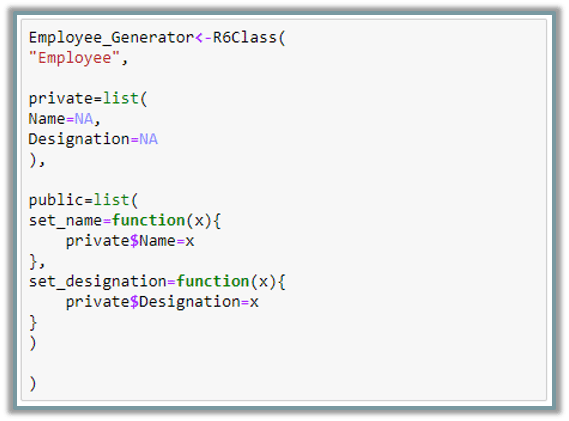 The above code consists of these parts:

We’ll be working with the “birth” data-set which comprises of these columns:

Let’s build a random forest model on top of this to predict the “smoke” column, i.e, whether the mother smokes or not.

13. Tell me something about shinyR.

Shiny is an R package that makes it easy to build interactive web apps straight from R. You can host standalone apps on a webpage or embed them in Rmarkdown documents or build dashboards. You can also extend your Shiny apps with CSS themes, htmlwidgets, and JavaScript actions.

14. What is advantage of using apply family of functions in R?

The apply function allows us to make entry-by-entry changes to data frames and matrices.

The usage in R is as follows:

X is an array or matrix;

MARGIN is a variable that determines whether the function is applied over rows (MARGIN=1), columns (MARGIN=2), or both (MARGIN=c(1,2));

FUN is the function to be applied.

If MARGIN=1, the function accepts each row of X as a vector argument, and returns a vector of the results. Similarly, if MARGIN=2 the function acts on the columns of X. Most impressively, when MARGIN=c(1,2) the function is applied to every entry of X.

With the apply function we can edit every entry of a data frame with a single line command. No auto-filling, no wasted CPU cycles.

15. What packages are used for data mining in R?

Some packages used for data mining in R:

Cluster is a group of objects that belongs to the same class. Clustering is the process of making a group of abstract objects into classes of similar objects.

Let us see why clustering is required in data analysis:

K-means clustering is a well known partitioning method. In this method objects are classified as belonging to one of K-groups. The results of partitioning method are a set of K clusters, each object of data set belonging to one cluster. In each cluster there may be a centroid or a cluster representative. In the case where we consider real-valued data, the arithmetic mean of the attribute vectors for all objects within a cluster provides an appropriate representative; alternative types of centroid may be required in other cases.

Example: A cluster of documents can be represented by a list of those keywords that occur in some minimum number of documents within a cluster. If the number of the clusters is large, the centroids can be further clustered to produce hierarchy within a dataset. K-means is a data mining algorithm which performs clustering of the data samples. In order to cluster the database, K-means algorithm uses an iterative approach.

A robust version of K-means based on mediods can be invoked by using pam( ) instead of kmeans( ). The function pamk( ) in the fpc package is a wrapper for pam that also prints the suggested number of clusters based on optimum average silhouette width.

This approach is also known as the bottom-up approach. In this, we start with each object forming a separate group. It keeps on merging the objects or groups that are close to one another. It keeps on doing so until all of the groups are merged into one or until the termination condition holds.

This approach is also known as the top-down approach. In this, we start with all of the objects in the same cluster. In the continuous iteration, a cluster is split up into smaller clusters. It is down until each object in one cluster or the termination condition holds. This method is rigid, i.e., once a merging or splitting is done, it can never be undone.

# The mtcars data set is built into R:

# We will focus on the variables that are continuous in nature rather than discrete:

# Standardizing by dividing through by the sample range of each variable

# printing the clusters in terms of the car names

Cbind(): As the name suggests, it is used to bind two columns together. One fact to be kept in mind while binding two columns is, the number of rows in both the columns need to be same.

Let’s understand this with an example: 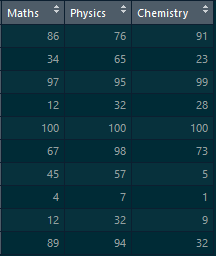 We’ll bind this with a new dataset “Percentage” which consists of two columns :-> “Total” and “Percentage” 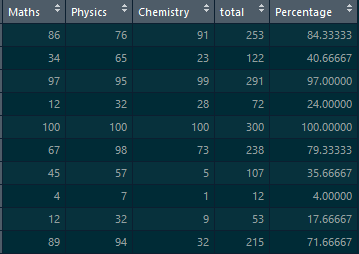 Since, the number of rows in both the data-sets is same we have combined the columns with the help of “cbind()” function

18. Give examples of while and for loop in R. 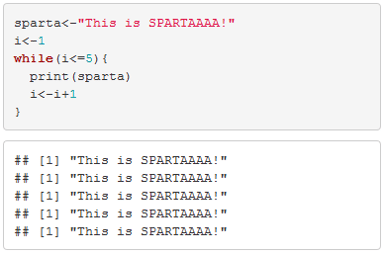 19. Give examples of “select” and “filter” functions from “dplyr” package.

Select: This function from “dplyr” package is used to select some specific columns from the data-set 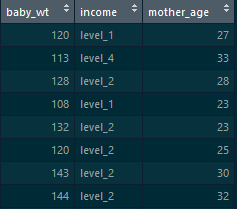 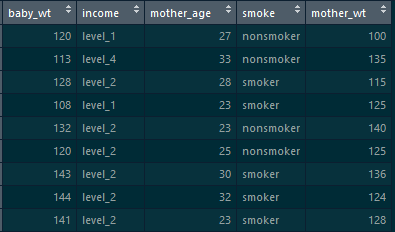 Filter: This function from “dplyr” package is used to filter out some rows on the basis of a condition: 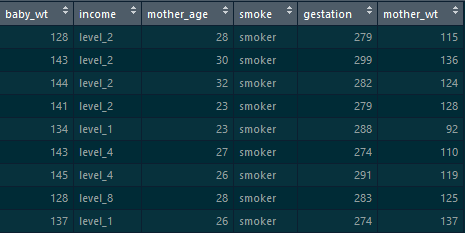 20. What is the use of stringR package. Give some examples of the functions in Stringr.

Some functions in StringR:

Live project based on any of the selected use cases, involving DATA SCIENCE.

Each class will be followed by practical assignments and interview questions which can be completed before the next class.

We have 24x7 offline and online support team available to help you with any technical queries you may have during the course or After the course.

Yes, you have batch flexibility here. Once you join in Stansys you can attend classes in any batch or N number of batches within 1 year with same faculty.

Yes, we will provide you the certificate of the attended software training course or to download (Certificate.pdf) soft copy version to their personal e-mail id (Who is attended training with us).

You get 1-year validity for live classes (classroom/online) and lifetime access to the Learning Management System (LMS). Class recordings and presentations can be viewed online from the LMS.

You can cancel your enrolment within 7 working days. We provide you complete refund after deducting the administration fee(Rs.500/-).

We have a community forum with students and industry professionals for all our customers wherein you can enrich their learning through peer interaction and knowledge sharing.

Drop us a Query